During the first days of 2011, I went to check the status of Internet Explorer 6 usage on http://gs.statcounter.com … and it’s good to see that this browser’s mindshare is constantly shrinking — between October and December 2010, it went from 3.1 to 2.3% in the US, and from 2.9 to 2.4% in Europe. It’s only in the African and Asian countries that IE6 still has a userbase higher than 10%.

The statistics for Switzerland are even more enjoyable: between that last 3 months, IE6 usage dropped from 2.05 to 1.74%.

With those numbers, I believe that web designers have a solid argument for ditching support of this 10-year-old software – unless the management decides that their Asian or African customers are deserving the extra time investment. How low must the usage share go, before it can be neglected? Under the 1% bar? Considering the benefits that HTML5 and CSS3 are bringing to modern browsers (notwithstanding that IE6 did not support CSS2 properly in the first place), we have an astounding number of reasons to drop IE6, even if its official end-of-life will occur in April 2014 (sigh) with Microsoft terminating its support for Windows XP.

Not only is the extra effort for the shrinking 2% of users extremely time-consuming — since (a) there are no proper developer tools for this browser, and (b) it needs a dedicated/virtual machine to be actually able to run — but actually the worst aspect is that supporting it means holding back the last ten years of HTML/CSS improvement for the other 98% of web citizens.

The latter point is probably the reason why major players — Google and Yahoo, to mention only two of them — have started in 2010 to kill support for IE6 in some of their most popular services. Below are screenshots illustrating the warning messages presented to IE6-users (as of September 2010): 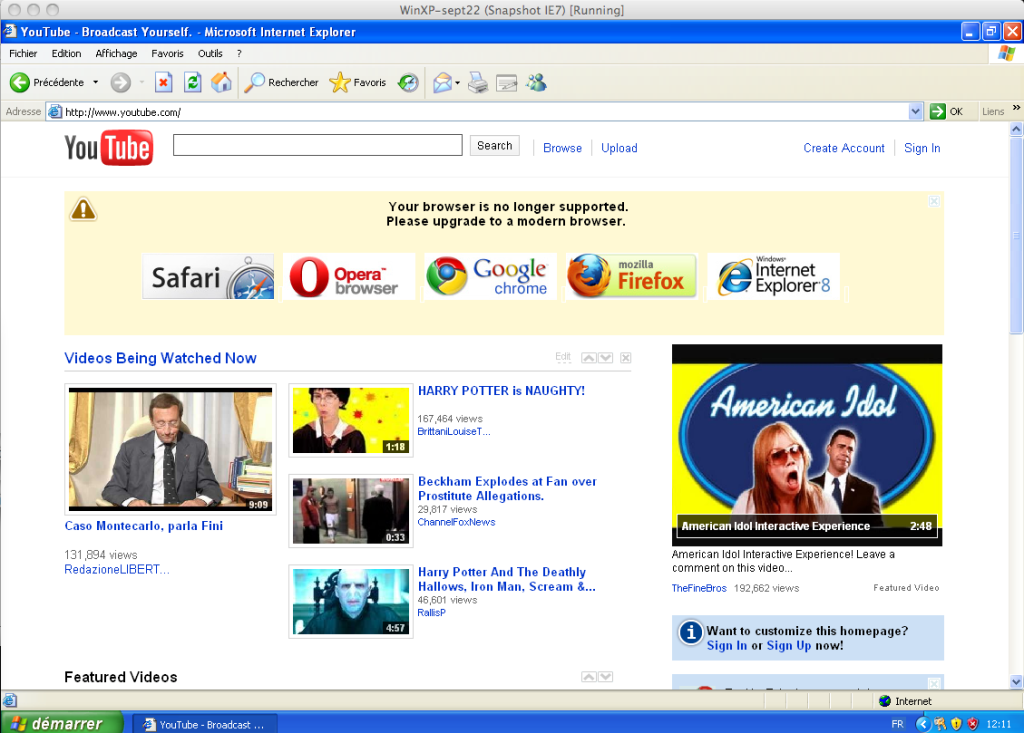 YouTube, a subsidiary of Google, is displaying to IE6 the canonical list of the five main modern browsers from www.browserchoice.eu. UPDATE (2011-01-31): the list is actually randomized, which is a nice effort. UPDATE: (2017): in December 2014, browserchoice was discontinued (see Wikipedia). Flickr (a service owned by Yahoo) shows a similar-looking list, but ommits Opera. Chrome comes first, IE is in the last position. The designers attempted to accomodate the visual sensibility of the average IE6 user, employing a nostalgic 8-bit era color-stripe. Not sure what the sad cloud is referring to. 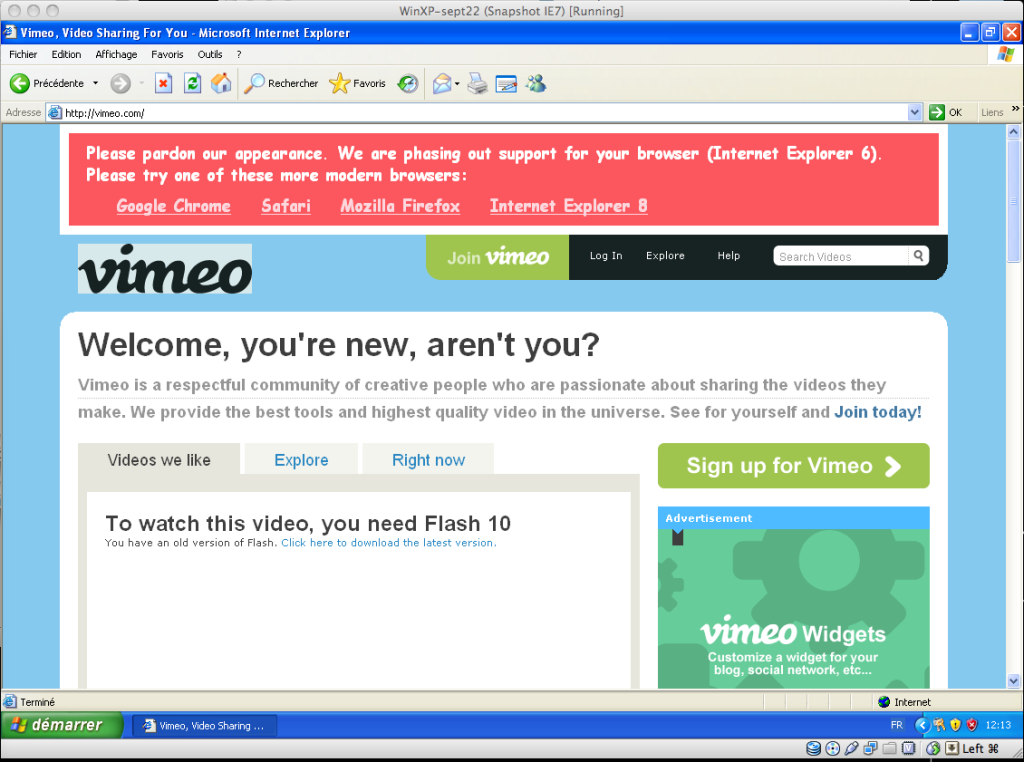 Vimeo takes a tongue-in-cheek approach, and doesn’t even care about fixing the transparent PNG of its main logo. The list here is in the same order as for Flickr, and poor Opera is missing again.

Social news website Digg has chosen another route: as they explained it in their blog back in August 2009, they decided against a warning message targetting IE6 users, as they found that those users “don’t have the choice”. So rather than displaying a clear warning message, they quietly dropped their support. The result: their site actually looks even more broken under IE6 than the previous examples.

All things considered, I think that showing the warning message is a Good Thing. If we look at the numbers in Digg’s survey, we see that one out four IE6 users wrote “I don’t feel a need to upgrade” or “I prefer IE6 to other browsers”, meaning that it wasn’t a technical reason that prevented them from doing so. Those users could certainly change their behavior if they would see the polite warning sign more and more often. And as a webdesigner, knowing that some of the sites I design will break under IE6 (as sometimes there just isn’t time to investigate workarounds or permanently test on two machines), I believe it’s a good practice to serve the broken page with a disclaimer…

Feel free to share your opinion on this topic, and don’t miss the next part in this series: Browser Wars in Europe: the Great East-West Divide.