A few days ago, the Libre Graphics Meeting 2013 (which will take place in Madrid during April 10-13, and where I will present the Libre Type Specimens project) has published the schedule of talks and workshops.

For anyone interested in the future of graphic software – be it typography, design, interaction, video – this is huge. I have the feeling that those four days will be incredible, a temporary autonomous zone where the brightest minds of the open graphics movement share their visions at the speed of thought.

Yesterday afternoon, while reading through that long schedule, I realized that this was the perfect occasion for reiterating one of James Bridle’s most brilliant post-digital-publishing hacks (a custom “Fieldnotes” book for the SXSW 2010 conference). Not only would it be fun, but having such a book would enhance my experience of LGM in many ways:

So that’s how the LGM 2013 Fieldnotes book was born.

On that rainy Sunday afternoon of March 17th, I entered in “speedproject” mode, and 24 hours later, the book has been entirely layouted and uploaded to Amazon’s servers, waiting to be approved by the CreateSpace staff. Update: and 24 hours later, it has been approved. Hooray!

I also applied a few lessons learned during the Type Specimens production, which improved the workflow: Some more screen captures from the production workflow: 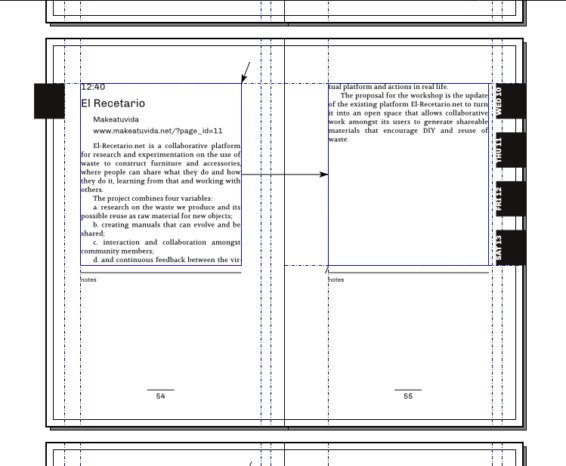 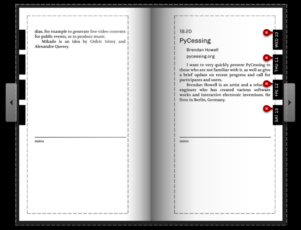 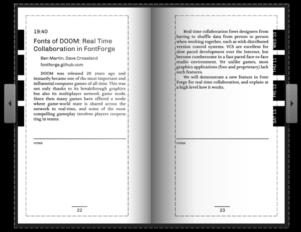 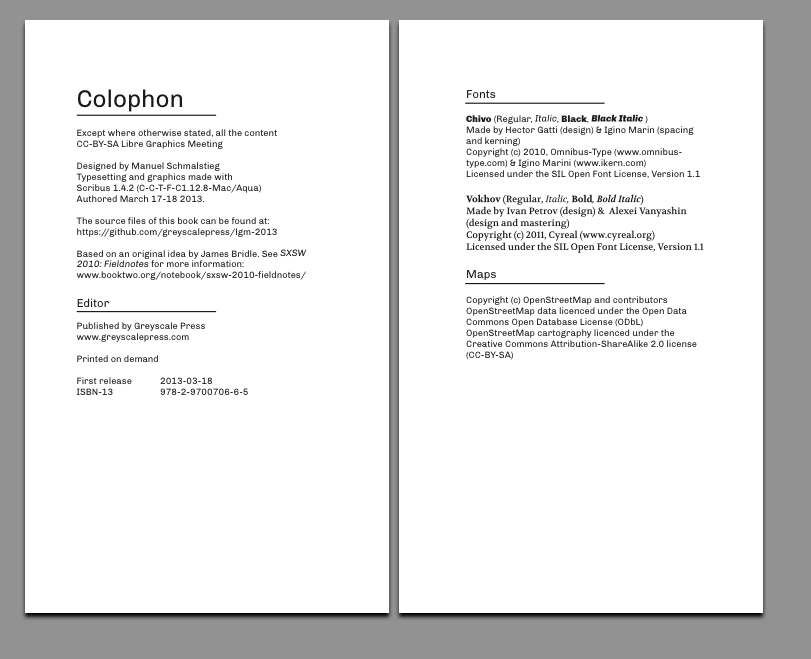 Now we only need to wait , and hope that the printed items will be delivered quickly. The list price should be 4.85 USD, or 4.44 EUR. If you want to see the original pdf, go to the GitHub project repository, and look into the /print/ subfolder.

And see you at LGM, hopefully!

Update (03/22, 23:00): after locating a few typos in the font credits, and improving some spacings, I uploaded an improved interior file. Lesson learned: Amazon now needs 24 hours to re-validate that file… and during that time, the book is unavailable for ordering. :-( Good to know that for the future. In the dashboard, I see that 25 items have been sold (12 by myself).